How Sweet It Is: A Look at Candy Store Branding

Popular candy stores, from those of the last century—Brach’s, Barton’s and Loft’s—to today’s wonderlands like It’Sugar, Dylan’s Candy Bar and Sugarfina, all possess retail branding designed to communicate fantasy, escape and joy. These colorful oases add a little dazzle to the everyday streetscape, like filling stations where everything tastes sweet, costs very little, and provides a quick hit of happiness. Humans are evolutionarily hardwired to love sugar, but beyond our simple biology, candy is pretty, sparkling, dazzling—a feast for the eyes as well as the palate.

Commercially made candy was once available only to the rich, who purchased sweets at fine confectionery establishments. It became easily available to the working class (and most importantly, their children) early in the 19th century, thanks to the mechanization brought about by the Industrial Revolution plus a more widely available supply of sugar. Suddenly great quantities of candy could be manufactured quickly, in numerous new forms, and sold for very little. Penny candy, bought a few pieces at a time from jars in mom and pop general stores, became the first item that children spent their own money on.

As times changed, stores selling nothing but candy evolved identities to capture the eye of consumers presented with ever-increasing choices. Candy-store design exploded in the 1950s, an optimistic era in which popular culture focused on space exploration and the promise of better lives through science. Taking cues from both sleek midcentury modern design and the more popular Googie style, candy stores became colorful, playful fantasy worlds; experiential destinations (think: Disneyland) for adults to reconnect with a simple pleasure of childhood and for kids to go wild. Today’s crop of candy shops feature retail branding that still mostly follows this model, although it’s tailored to the needs and tastes of consumers wired in to social media.

In 1904, Emil J. Brach opened “Brach’s Palace of Sweets” in Chicago and found an eager market. By 1958 Brach’s introduced a concept, Pick-A-Mix, that hearkened back to the visual displays of penny candy. Pick-A-Mix customers scooped their selections from an array of sweets displayed in barrels and paid one price per pound. The idea, which was extremely popular with consumers, brought the nostalgia of the corner store into the then-new supermarket. These days Brach’s most popular product is its candy corn, available year round. Brach’s logo relies on colorful blocks with knockout white letters, once set straight across, which recently began jogging up and down from the baseline, with a more-fun font.

Loft’s was founded during the Civil War era by British immigrant William Loft, and it grew until it became the largest maker and seller of candy in the world by the 1920s. Its storefronts peppered the streetscape throughout the greater New York City area, making an impression on passers-by through the first use of neon signage in the city. This remarkably intact sign, which came to light in 2016 during a building renovation at 88 Nassau Street in lower Manhattan, was probably manufactured sometime in the 1960s. Its pre-Helvetica block and script letterforms are based on the company’s midcentury logotype, outlined in metal channel letters mounted to an old vitrolite storefront facade.

Loft’s signs reversed the usual typographic hierarchy used by neon sign makers, using the plainer block letters for the business name and spelling out the generic CANDIES in script. The Loft’s logo seen on the Nassau Street sign was created by industrial designer Charles C.S. Dean, and was showcased in the November 1945 issue of Interiors Magazine with the headline “Old Candy Chain Modernizes.” Dean’s new design for the storefronts specified the use of “Rembrandt blue Carrara glass” for the facades, with horizontal strips of stainless steel running through. The hashed-line crossbar of the logo’s stylized letter ‘F’ is evocative of candy stripes. 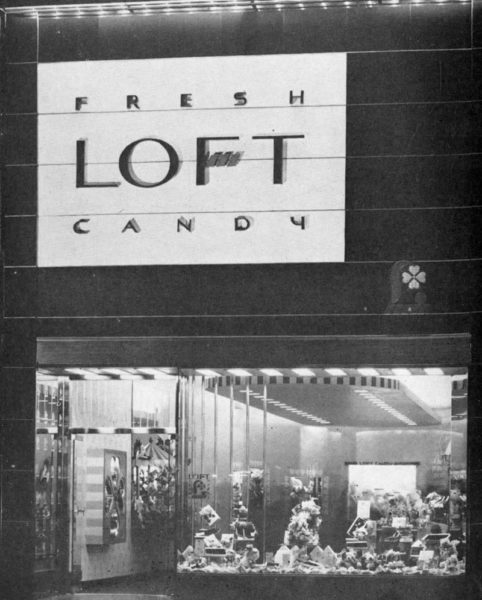 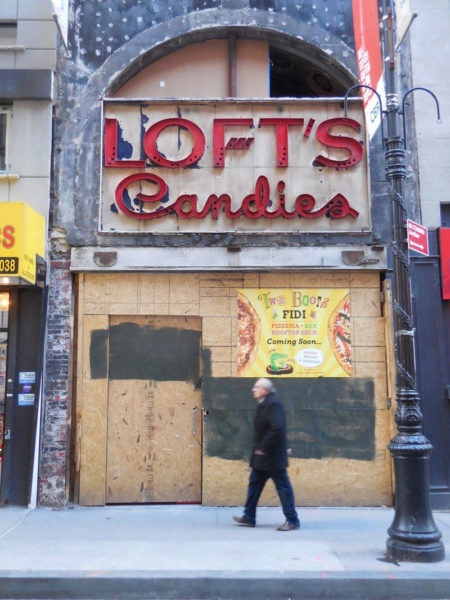 Barton’s launched in 1939 when Viennese immigrant Stephen Klein brought his family’s trade to the New World. Klein had quite an eye for merchandising, retail branding, and design. “In America, candy was too serious,” he told Commentary Magazine in 1952. “I figured a customer should get a pleasure from walking into my store—he should feel he’s getting a production as well as a pound of chocolate. He should feel good, like he’s in the air, like floating or dancing, like in a big Hollywood musical. So I had my first store designed in light-hearted Viennese style, joyful colors.”

California architect Victor Gruen, a fellow Austrian émigré (and creator of the modern indoor mall archetype), was responsible for that shop on 81st Street and Broadway as well as Barton’s 50th store in Herald Square, opened with great fanfare in 1952. For this milestone, Gruen collaborated with midcentury graphic designer Alvin Lustig to create a “toyshop for adults.” The entire exterior was painted bright yellow as a visual pop amongst the drab brownstones surrounding it, and the interior boasted custom fixtures, witty displays, and a palette of modified primary colors set off by chic black, white and gray. Signage featured a reverse-stress slab serif typeface, each letter positioned on its own rectangle, with the word “bonbonniere” below in a flowing script. Steve Heller, co-author of Born Modern: The Life and Design of Alvin Lustig, says, “What suggests the Lustig hand is color and rectangles and type, particularly the slab serif logo. As for the cabinetry, the way that the cases are not sitting on the floor gives it a Lustigian feeling. He loved the idea of floating on air.” 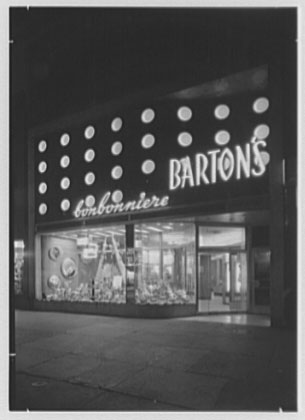 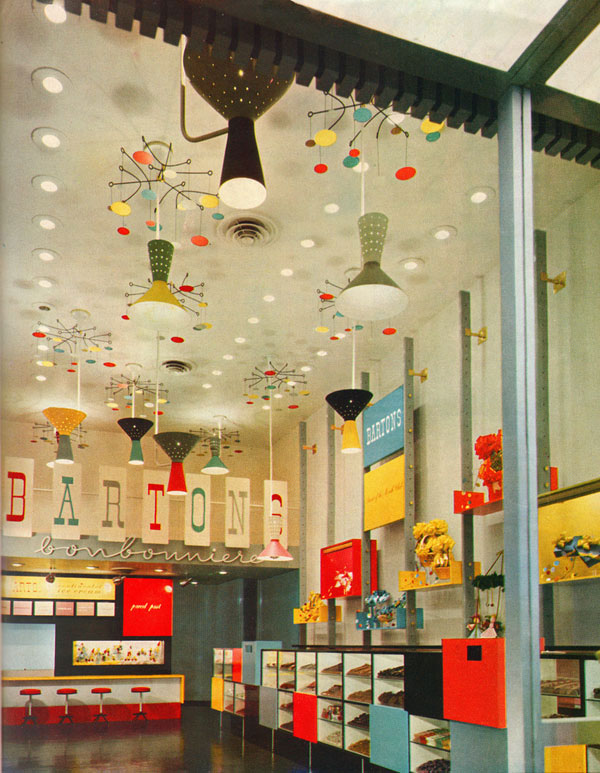 The flagship boutique on 60th St. & Third Ave opened in 2001 when proprietress Dylan Lauren set out to create a lifestyle gift store for a high-end customer, banking on the notion that candy never loses its appeal no matter how old you are—the store recently hosted a birthday party for a 70 year old in its event space. Chocolate bars carrying the playful Dylan’s logo sit alongside transparent bins of colorful cheap candy like Runts and gummies sold by the pound (for far more than it costs to pick them up at Duane Reade, but it’s easy to get caught up in the moment here).

The logo, typeset in friendly letterspaced Gill Sans Bold accompanied by cheerful illustrations of all-day suckers and ice cream cones, feels more restrained than the rest of the décor— an overwhelmingly colorful more-is-more retail branding environment entirely made out of candy or architectural elements that look like it. Barton’s idea of a toyshop for adults lives on.

Jeff Rubin, a former partner in Dylan’s Candy Bar, opened the first It’Sugar in 2006 in Atlantic City, NJ. According to the business’s website, he envisioned the store as “a one-of-a-kind retail destination with a humorous twist that mirrored his unique personality.” There is definitely a particular sophomoric sensibility to the look of the stores: a kind of nostalgic retro Vegas, hypersaturated, accessible—the Victoria’s Secret of candy stores. Bright magenta, lots of dirty jokes, and gag items abound. Sample products: Camel Balls sour bubble gum, SNL-themed candies such as Colon Blow and Dick in a Box, and a giant gummy mug of beer. The logo typeface, a wide extended sans serif with rounded strokes, has less cool chic and more mass market hysteria about it. It’s hot in a cheap-looking way.

Founders Rosie O’Neill and Josh Resnick based their business model on a simple idea: Why should kids have all the fun? Company lore has that brainstorm happening during their third date, a viewing of Willy Wonka and the Chocolate Factory. The couple, now married, opened their first luxury candy boutique in Beverly Hills in 2013. The look of their modern emporiums aims squarely at adults in search of curated artisanal products doled out in tiny Lucite cubes. The pretty packaging, is, not coincidentally, Instagram-ready, and the stark white stores radiate restraint and exclusiveness.

This retail branding won’t make you feel like it’s over the top or blinded by colorful candy-themed architecture. Instead you will nibble on rosé flavored gummy bears (also available in bourbon and champagne flavors), or sample the tequila and single malt scotch cordials. The store identity features pastel-blue packaging lettered with tiny, letterspaced, discreet white old-style type. No kid stuff.

How to Become a Branding Expert is a collection of HOW Design University’s popular branding workshops with Marcia Hoeck and Ed Roach, including Common Mistakes Designers Make with Branding and How to Fix Them, How to Position Yourself as a Branding Expert and How to Talk About Branding. Enroll today.

The Daily Heller: How is iti

2020 will be over in a few months. Yet the perfect storm of systemic racism, Covid pandemic and supremacist Trumpism will not, simply rec...
50

Reading the Tea Leaves in Every 2020 Campaign Logo