Print Publications’ book Identify: Basic Principles of Identity Design in the Iconic Trademarks of Chermayeff & Geismar looks back at the last half century of work by Chermayeff & Geismar, the design studio behind many of the world’s most recognizable trademarks: Chase Bank, the Library of Congress, NBC, National Geographic, PBS, Showtime, and many others. Established in 1957, the firm helped pioneer the modern movement of idea-driven graphic design, and its projects span every discipline, including visual identities, exhibitions, print and motion graphics, and art in architecture.

We talked to the firm’s partners, Ivan Chermayeff, Tom Geismar, and Sagi Haviv, about swooshes (never!), whether Paul Rand shares responsibility for Enron (no), and who is really the boss (none of them).

Chermayeff & Geismar, identity for the Library of Congress (2008).

Aaron Kenedi After being in business for 55 years, why did you decide to write a book on identity design now?

Sagi Haviv There is not much written about identity design from the standpoint of practitioners. We felt that through the stories of how these enduring trademarks came to be, people could learn a lot about the topic.

Tom Geismar For the first time, to try to explain some of the issues and the thinking that led us to develop the wide range of marks we’ve designed over the years.

Chermayeff & Geismar, logo and identify for the cable channel Showtime (1997).

Ivan Chermayeff A memorable identity is one that is appropriate, flexible, and distinguished by its originality. Further, a good trademark, whether a word mark or a symbol, is devoid of fashion or trend, which makes it potentially iconic if it’s seen for long enough in the right places.

Sagi Haviv It has to be unusual in some way, even awkward sometimes, in order to “hook” the viewer and persist in the mind. It nevertheless has to be simple and uncomplicated in form. This dichotomy―between simple shapes on the one hand, yet distinctive ones on the other―is what we work with every day.

Aaron Kenedi At a time when companies’ images are more dispersed over more media than ever before, is the era of what you call “simple, focused, concept-driven” identity design over?

Tom Geismar No, just the opposite: “Simple, focused, concept-driven” graphic identities, if done well, work best in a wide range of media. It’s the ones that rely on details of shading and other graphic niceties that have a hard time.

Sagi Haviv In this supersaturated visual environment, simplicity and consistent application of a brand identity are even more valuable because they naturally make the company or institution stand out in the crowd of busier, more complicated visuals.

Ivan Chermayeff There is no “era” of simple, focused, concept-driven identity design. There is only design that grows out of understanding audiences for specific problems, and that evolves from an idea. This is an approach that does not depend on any specific time period or its technology.

Aaron Kenedi A trademark often becomes the public face of a company. Among the companies you have worked for, some inevitably have gotten black eyes, most recently in the financial crisis. When you see your logo for a client like Chase (now J.P. Morgan Chase), do you feel a sense of responsibility because, in a sense, you vouched for them? Or do you think the design work can be separated from the actions of the client?

Ivan Chermayeff Good graphic design is not tarnished by the greed or the illegal or other self-imploding acts of clients. We do not feel responsible for the character of those we work for. Good design should follow looking into the products and reputation of clients who approach you, but this does not mean you have to follow them into bed.

Tom Geismar We have always been concerned not to work for companies and institutions that we can’t feel positive about, and we have refused various assignments over the years. But we don’t feel that doing work for a particular client means that we have “vouched for them.” Obviously we have no say over what they may or may not do in the future, and in any case what people think of a company or institution is determined by their experience with and the actions of that entity, and has little to do with the logo. Should Paul Rand have some measure of responsibility for the Enron debacle?

Sagi Haviv When we create a great logo for an environmental organization, we do not see ourselves as saving the planet. In the same way, we cannot take responsibility for the “evil” actions of corporations we brand. All we can hope is that by doing good work for visible companies and organizations, we can have some positive effect on the visual environment.

Aaron Kenedi What logo would you redesign? Is there one you wish you had designed yourselves?

Tom Geismar I wish I had designed the CBS eye and the ABC sphere. They’re both brilliantly concise, powerful, and memorable.

Ivan Chermayeff McDonald’s would be great to redesign, as they are so much in the landscape and contribute so little to its quality.

Above: Chermayeff & Geismar, logo for Chase Manhattan (1955), and early Chase logo sketches (below)

Aaron Kenedi How do the three of you collaborate? Who has final say?

Ivan Chermayeff Tom, Sagi, and I all put forward ideas or make comments, which include additions, subtractions, or alternatives to one another’s work. We discuss all the options (as there are always choices to be made), pick the best by common agreement, and throw out the seconds. It’s a democratic process, without too much fighting, and no one has the last say. No one is boss. Sometimes, by the way, good ideas come from the staff in support below, and we try not to be deaf to them.

Above: Chermayeff & Geismar, logo for Public Broadcasting System (1984). Early sketches for the PBS logo below. 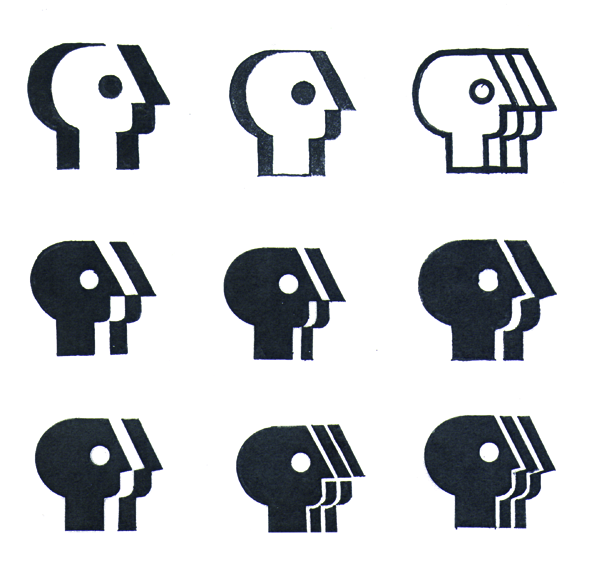 Aaron Kenedi You say you design a logo today in the same way as you always did. Haven’t leaps in technology and the media changed how you work?

Tom Geismar Do authors today write differently because their words may appear in digital form, and because they use computers rather than typewriters or pencil and paper? I don’t think so, although it’s now much easier for them to make changes, edit, print drafts, and, where appropriate, take advantage of the potential provided by digital media.

Sagi Haviv As someone who grew up during the rise of the digital era, I’ve been astonished to see how these simple marks, conceived before this technology, thrive in the new visual environment―in tiny sizes on the web, as favicons and mobile-device application icons.

Aaron Kenedi What advice would you give to young designers who have all the necessary technology at their disposal?

Sagi Haviv To treat the technology as a tool but not as the generator of ideas. The technology of today will facilitate anything your mind can dream up―but first you have to dream it up in your mind. Only then should you go and execute it on the computer.

Above: Chermayeff & Geismar, identity for NBC (1980), shown in television studio. Below, the NBC logos over the years.

Tom Geismar Most of our clients are looking for a graphic identification that can work successfully for many years without becoming stale or dated. We consciously try to avoid graphic trends and can proudly say we’ve never done a swoosh.

Sagi Haviv We find that as long as we create something simple and distinctive, it can then take on any “fashionable” treatment when necessary, such as 3-D rendering, drop shadows, and so on, without losing its basic recognition.

Ivan Chermayeff Show us a current trend, and its death will not be far behind it. Once a trend is “current,” it is in fact already dead. No point in starting out at the finish line.

Want to learn more from Chermayeff & Geismar? Check out this free DesignCast, featuring their approaches to identity design on Design TV.

Wu-Tang Clan's New Photo Book Ain't Nothing To F**K with.