Mort Künstler is best known today for his vivid paintings of scenes from American history, specifically the Revolutionary War and the Civil War. These works have been featured in books and calendars, and spotlighted in exhibitions around the country.

Original Painting by Mort Künstler, I Fought the Sea Killer © 1956

Men’s adventure magazines were the bastard child of the popular pulp magazines of the ‘20s, ‘30s and ‘40s, and many of the artists who worked for the pulps also put paint to canvas for this next evolution, most famous among them being Norm Saunders. Numerous publishers saw an easy buck in the men’s adventure magazines, but none more so than Martin Goodman’s Magazine Management, whose titles included Male, Stag, Action For Men, Battlefield, Complete Man, For Men Only, Man’s World, and many others.

Künstler started working for the men’s adventure magazines shortly after graduating from Pratt Institute in the early 1950s. “I was a hungry guy, and I was persistent,” he says. “I clicked with several [men’s adventure magazine] publishers, and it almost became a competition for my services. I ended up with Magazine Management mostly because they paid better and offered me as much work as I could handle.” Künstler also did a lot of work for other publishers, whose titles included True, Argosy, Adventure, American Weekly, and The Saturday Evening Post.

The men’s adventure magazines specialized in lurid headlines and even more lurid covers, often depicting over-the-top war stories, daring tales of escape, deadly encounters with dangerous animals, and sex. Most of the stories were pure fiction but presented as fact – an easy way to lure gullible readers. Künstler illustrated them all with a straight face.

“I always tried to make my covers and interior illustrations as believable as possible,” he says. “That was my knack, and instrumental in why the magazines sold so well. And I was rewarded as a result. It worked out very well and I had a lot of fun with it.”

A stickler for accuracy, Künstler often used model kits of war planes and machinery, assembled by his son, for reference. This allowed for dramatic perspectives that would have been unachievable with photo references alone.

Künstler also became adept at drawing wildlife, a talent that came in very handy when he started getting assignments from more mainstream outdoor sports publications such as Field & Stream, Sports Afield and Outdoor Life. “I did a lot of the man-versus-animal stuff for the men’s adventure magazines,” he observes. “I painted herds of elephants and rhinos and lions and tigers – God knows what kinds of animals, in every situation you can imagine.”

The stories with a sexual component sometimes made Künstler a little uncomfortable, and he admits to turning down a couple of assignments because of that. When he did say yes, however, the results were stunning – sexy in a clean, classical style. “By today’s standards, none of them are offensive,” Künstler says, “but they were slightly risque. I never painted an illustration in which a woman’s breasts were seen; they were always covered by long hair or a torn blouse.”

Künstler was one of a talented group of illustrators that included the likes of Rafael DeSoto, Richard Powers, Basil Gogos, Robert Stanley, Vic Prezio, Ed Emsh and James Bama. Many of these artists, like Kunstler, went on to much bigger things after toiling in the adventure mag trenches. Gogos, for example, achieved prominence as a frequent cover artist on James Warren’s long-running Famous Monster of Filmland magazine, while Bama shined as the cover artist on a popular series of Doc Savage paperbacks published in the 1970s. Today, Bama is best known for painting the American west. (Fun fact: The only Doc Savage paperback cover NOT created by Bama was painted by Künstler.) 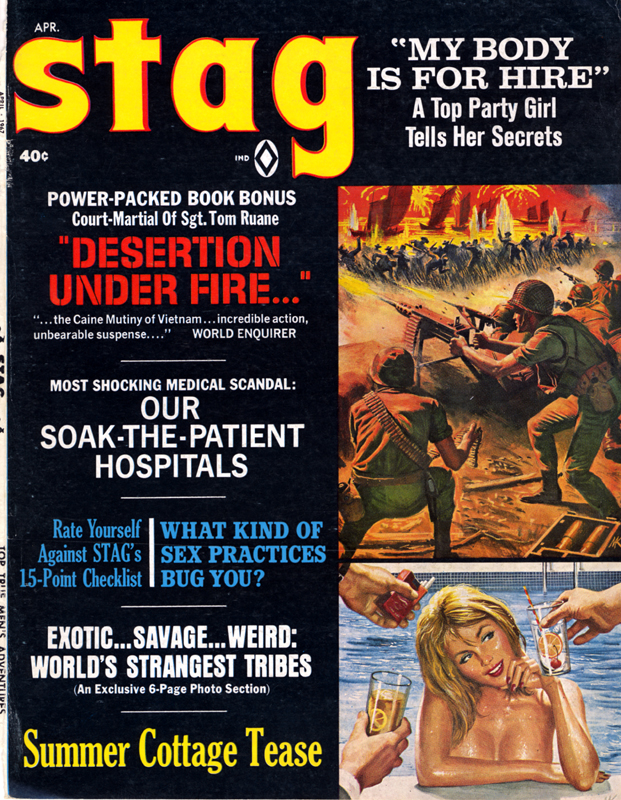 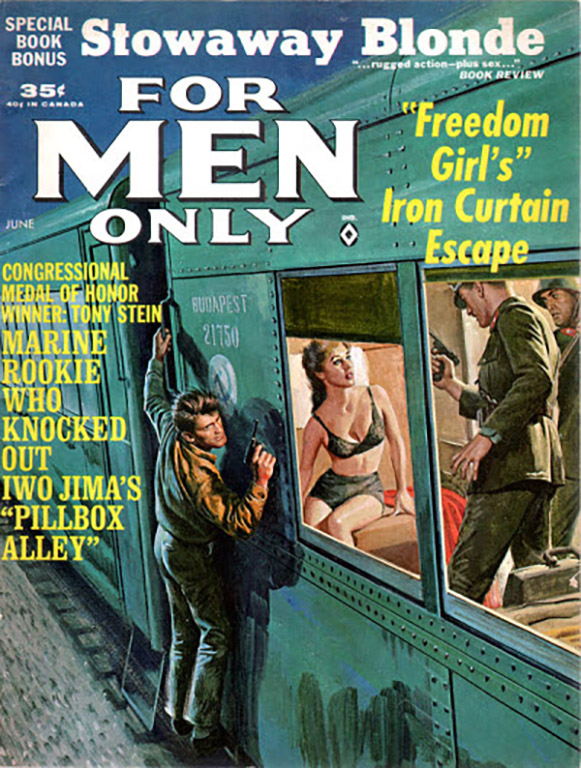 Penning the stories that Künstler illustrated were several writers who would go on to much greater professional heights. Magazine Management editor Bruce Jay Friedman was a successful playwright (Steambath), novelist (Stern) and screenwriter (Splash), while assistant editor Mario Puzo became a household name with a little novel titled The Godfather. “Bruce was a guy who was more or less off the wall,” Künstler says of Friedman. “He loved to come up with crazy stuff.”

Künstler was incredibly prolific during his time with the men’s adventure magazines, creating hundreds of covers and interior illustrations. “I typically did about six paintings a month,” he says. “I sometimes did as many as ten in a month, working very hard. I was very careful about how I drew things up, which really helped.” Kunstler usually had some advertising work going on the side as well.

Künstler worked in a variety of media, creating covers and illustrations in gouache and oil. “You could get any kind of detail with watercolor brushes, which allowed you to work smaller than you would if you were working in oil,” he explains. “I liked to paint in oil, but the other media were much quicker.”

Design was always on Künstler’s mind, whether working on a cover painting or spot illustration. Most challenging, he says, were illustrations requiring a high view or a lot of figures. “Mob scenes were tough,” he confirms. “I remember doing a painting of the New York draft riots during the Civil War and illustrations of prison breaks [each requiring crowds of people]. Oh my God, I shudder at the thought!”

Original Painting by Mort Künstler, Staked Out in the Desert © 1957

Künstler filled his canvases, but always in service of the stories he was illustrating. “A small area doesn’t have to jump out at you, but it should help tell the story,” he says. “If there was a square inch between someone’s legs or over their shoulder, it should have cars or figures in it. I learned this from an illustrator named Robert Fawcett, who gave a lecture at Pratt. He said that the people who were paying for the picture were paying a lot of money per square inch, and should get a lot for their money.”

According to Künstler, the work he did for the men’s adventure magazines helped inform his art moving forward. “An artist should learn from every picture he or she creates,” he says. “No matter the situation, I always worked out the perspective and tried to draw it as dramatically as possible. That didn’t change when I started doing historical paintings.”

Interest in Künstler’s work in the men’s adventure magazines has never been stronger. A traveling exhibition of his original paintings done for covers and interior illustrations will begin at the Heckscher Museum in Huntington, New York during the fall of 2019. Many of these original paintings have never been seen before. “I have very fond memories of every illustration I’ve done,” Künstler observes. “As a matter of fact, I don’t think I’ve worked a day in my life!”

Original Painting by Mort Künstler, The Day They Captured the Empire State Building © 1970

Original Painting by Mort Künstler, In a Hot Spot © 1957