After experiencing firsthand the eternal embarrassment of a poorly executed type-based tattoo, I started looking for artists who specialized in custom lettering to revive my illegible ink. I found myself wondering: Can tattoo artists be considered typographers? Are tattoo artists typographers?

There are those who very aggressively believe that lettering and calligraphy are not—and will never be—typographic. But why not?

Tattoo artists are typographers in their own right. Alleging they aren’t is like condemning Johannes Gutenberg as artificial and Alfred Roller as an amateur. These men are now regarded as inspirational innovators in an industry that has clearly had a hard time adapting to change throughout history.

Excluding calligraphic-based styles from typography is an elitist result of Jan Tschichold’s claim that clarity triumphs intention. Heinrich Wieynck’s comment on his former student’s style applies as much to tattoo artists today as it did the Bauhaus movement in the 1930s: “The secret to good typography does not lie in obeying a one-sided school of thought; instead it will always remain bound up with personal creativity capacity.”

If typography isn’t intended to convey emotional expression and is strictly for communicating, why don’t wedding planners design invitations with Comic Sans? Why are text-based tribute tattoos to Ernest Hemingway designed to resemble Courier?

Perhaps many in the design world turn their noses up at graffiti—a background the majority of tattoo artists specializing in lettering come from—because it’s an art comprised of diversity. Perhaps the design world is scared to incorporate lettering into the standard realm of typography because that would allow stereotypical lower-class artists to participate in a historically white-male–dominated industry. For centuries, graffiti has given a voice to the disenfranchised throughout the world. Tattoos, while they’ve become less taboo in recent years, were once deemed tasteless and for uneducated, impulsive degenerates.

Tattoo artists themselves seem to be excluded from the typographic world not because they lack qualifications or because major differences in definition exist, but because it’s largely a boy’s club that’s averse to change. It’s arbitrary. Above all else, these minute dividing details that put type a few ranks above every other letter-based artform are dated and the result of the baby boomer generation’s unwillingness to adapt to the digital and DIY world. The internet and Instagram have transformed typography to be about much more than just arranging type for print.

In this case, it’s arranging letterforms for skin. The renaissance of handmade type (sorry, Paul Shaw et al.) has only further catapulted tattoo artists into the typographic world. Tattooers have to take the rules already established and further specify them to withhold the wear and tear the human body goes through. Unlike paper, skin is alive. It requires its own systematic approach to maintaining its integrity and legibility. 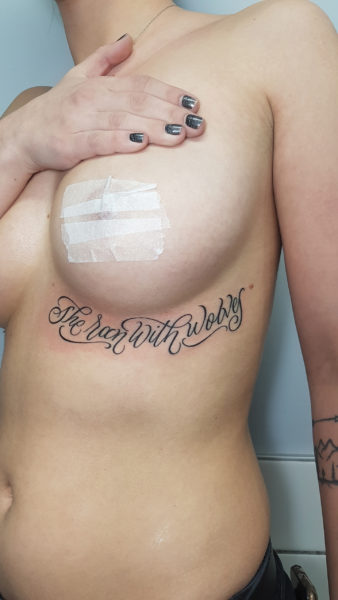 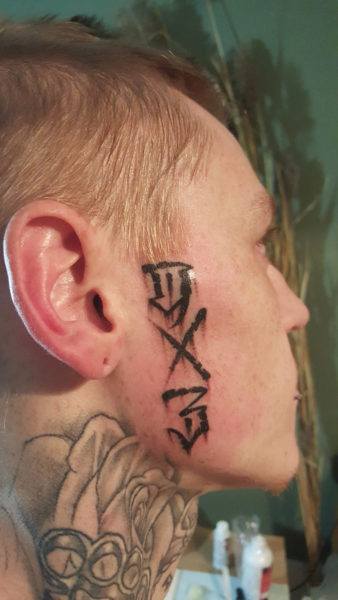 Filippo Marinetti’s Futurism movement was also uneducated. His revolution aimed at the so-called typographic harmony of the page, according to his manifesto Destruction of Syntax. Critics were less-than-thrilled with the Futurists’ anti-establishment publications and performances. Yet Marinetti has since been credited with opening the proverbial doors to modern graphic design.

Herb Lubalin was criticized for his type work’s reduction in legibility. When the phototypography pioneer was scrutinized for his tight tracking and kerning, he responded, “Sometimes you have to compromise legibility to achieve impact.” He was awarded the Type Directors Club Medal in 1984 after his death.

David Carson’s digital-revolutionized work focused more on the emotional impact than the type’s legibility. It pissed a lot of people off , even Paul Rand. But a few years later, Newsweek wrote that Carson “changed the public face of graphic design.”

The definition of typography has historically and continuously changed, almost always contradictory to the decisions made by the design police. But where would type design be without rule-breakers like Lubalin and Carson? They toyed with new technology as it unraveled and prevailed despite the harsh criticism of their elders.

So instead of dooming ourselves to repeat the past, we should learn to recognize innovation when it brazenly appears, and tolerate it—maybe even attempt to understand it. Let’s drop the academic parlor games of whose definition of typography is the most exclusive to keep it a boy’s club, and loosen the reigns on an industry—and definition—that thrives on adaptation.

With that said, here are five artists taking tattooing to new typographic heights. Here’s to hoping that they and their peers can break the stubborn, cyclical nature of design definitions.

“I design typefaces on the side, but I began to tattoo because I felt that I had more creative freedom and I could do letters that were a little more expressive and less rigid,” Bryan Heimowski says. “I still have a love for type design … but I wanted to start with something where I could develop my style.”

He defines his style as calligraphy-based, and freestyles with a Sharpie directly onto the skin. “I do keep in mind spacing and kerning, but that’s something that an artist should be able to execute from the beginning to end,” he says. “Regardless of whether the type is on a body or a poster, typography should fit where it’s being placed. Not just stuck on like a sticker.”

As both typographer and tattooer, Heimowski recognizes the place that calligraphy occupies within typography, though it might not fit into any standard definition.

“Everything has its purpose,” Heimowski says. “Whether it’s to create a legible or fancy typeface, they have the same function. And that function is to convey a message. It just depends on what message you’re trying to send.”

As a result, Heimowski stresses that it’s important—for tattooers and typographers alike—to understand what the function is, and how it will inevitably change over time.

“How do you think people took a leap from blackletter to sans serif? Through innovation. If typographic art is going to move forward, it’s always going to have to try something new,” he says. “I really don’t see typography as being set in one single way that it should be done. That’s like telling a painter to only paint in realism; it’s not how it works.”

When graffiti-turned-tattoo artist Kingsley Hayward first swapped out cans of spray paint for ink and rotary machines, he was primarily interested in producing darker images—like skulls, snakes and shrunken heads. “But lettering is quite popular; it doesn’t matter what kind of style you’re into, everybody loves lettering,” the London-based artist says. “I got asked quite a bit for lettering, so I steered that way.”

The self-proclaimed letterhead’s letters are exhaustively detailed with a level of intricacy that seems to combine elements of 16th-century Mannerist calligraphy with its gothic cousin, Fraktur.

“I like to base my stuff on structure, make sure everything matches up with something else so there’s a flow,” Hayward says. “I guess I have a rough idea in my head and then I go with it. No real method to the madness.”

His hybrid system of structure and madness is startlingly successful. Despite the few seconds it takes for the eye to adjust to the onslaught of detail, the letterforms seem to levitate above the swashes and exaggerated strokes and become quite legible. “I prefer to do a lot of small details that you might not pick up on straight away, but that bring everything together,” he says.

Almost paradoxically, he achieves this. Hayward draws inspiration from fellow script and lettering artists such as Scott Banks and El Whyner. And, of course, from his younger days as a graffiti artist. “Graffiti and tattooing have a kind of strange friendship because your typical graffiti style doesn’t work as tattoos, but you can see graffiti’s huge influence in the majority of work by anyone who does lettering.”

“Skin isn’t like paper; over time it stretches and ages,” says tattoo artist Grace Joseph. “You need to leave enough room inside the actual letters so the ink can expand, but still be legible over time. I think that’s the biggest thing I struggle with trying to convey to people: The tattoo is going to be larger than they were thinking,” she notes with a laugh.

Most of the Oakland-based artist’s clients request typefaces found online or from Microsoft Word. “I try to convince them that if you’re working with someone who is a custom-lettering artist, you should probably let them go ahead and come up with some original lettering,” she says. “It’s more organic to the flow of the body, rather than something blocky from the computer.”

Her style is graffiti-meets-gothic lettering, mixed with decorative scripts evocative of type designer Ken Barber’s early 2000s work. Her letter structure is tailored to where the tattoo is located on the body; she accentuates swashes and adds ink traps to further ensure the longevity of the tattoo’s legibility as well as its aesthetic appeal.

“What I find creates the best tattoo is when a client has a general idea of what type of script they’d like, and then let me run with it,” she says. “Having more freedom always results in a better, more creative tattoo.” 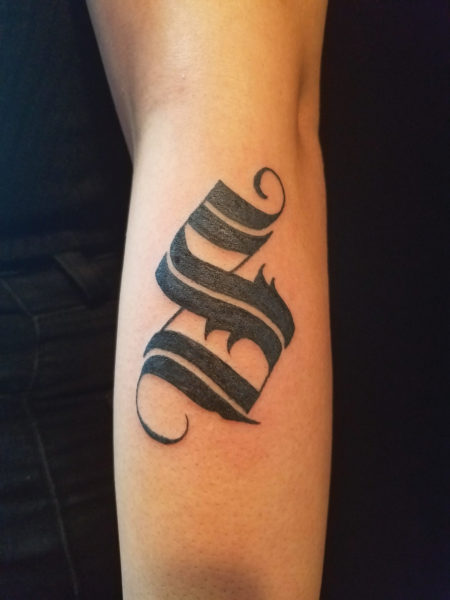 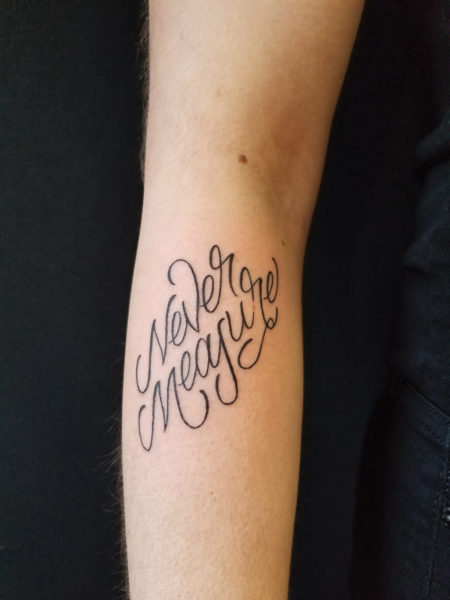 “Growing up I was always intrigued with lettering and graffiti, but I never got out and bombed walls,” says Edwin “Eds” Durrani. “I couldn’t do it. I wasn’t prepared to catch a vandalism charge.”

Instead of tagging the streets of Toronto, Durrani broke the law in other ways—for example, getting his first tattoo at 14 years old. Three years later, Durrani studied graphic design at George Brown College for a year before dropping out. “Maybe I should’ve waited a bit longer,” he laughs. “But that’s kind of how I live; if something feels right, it feels right.”

But that wasn’t always the case.

Like Joseph, “When I first started, people wanted Edwardian Script and other Microsoft Word fonts,” Durrani says. “It’d be too small, the loops would bleed together over time, and some people had a hard time understanding that. So I would write it out in my own style and see if they liked it. Nine times out of 10, they did.”

“Instagram is huge in my industry, and I connect with a lot of typographers and people who don’t tattoo but are involved in the art of lettering, so I guess I am one of those type guys.” He pauses—“but I don’t mind.” 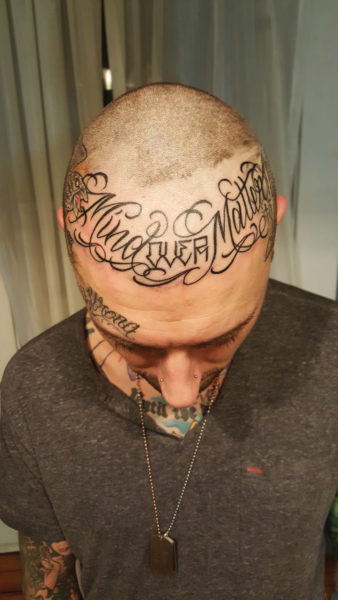 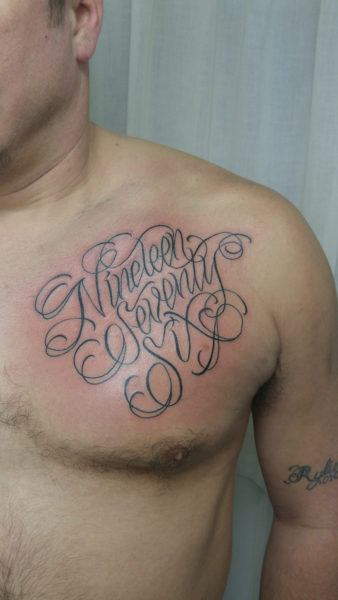 Growing up in Carson, CA, Lio Faamasino was introduced to graffiti when he was around 12 years old. He’s been into lettering ever since. And though Faamasino has done hundreds of graffiti-inspired pieces, his preferred tattoo style is script and incorporates elements of ambigrams, broad-nibbed tapers and inclines.

He’ll either hand-draw the letters and transfer the type onto a client, or freehand directly on the skin, depending on size and placement.

Which isn’t to say Faamasino’s lettering lacks consistency. Instead of restricting himself to a style guide or particular family of font and characters, Faamasino lets the word itself dictate the flow of each letter. The results are incredibly legible and fluid—not dissimilar to the concave and Uncial typefaces of blackletter artists Georg Trump and Rudolf Koch.

“I think that they’re just haters,” Faamasino says of those who look down upon custom lettering as a typographic artform. “Because in the typography world, those people probably have to go uniform and it has to be a certain way. But in our world, we can design the letter any way we want.” 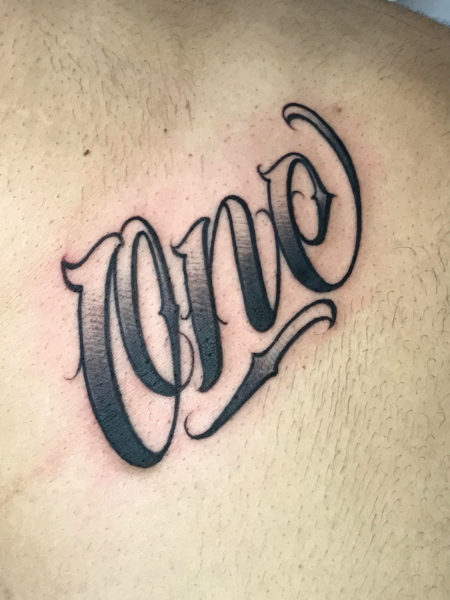 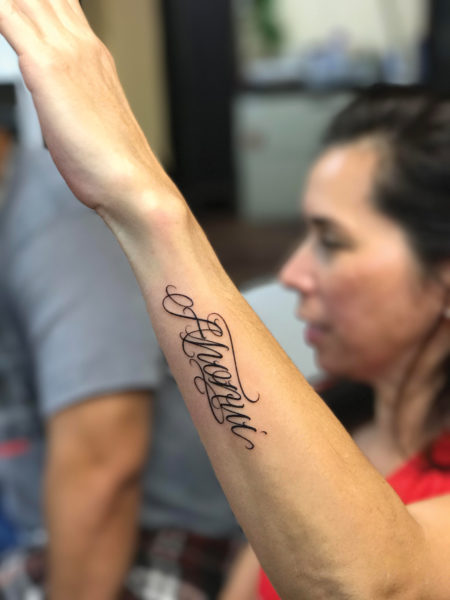 Have you gotten your copy of this year’s Print Magazine Typography Issue? With a cover by John Keatley and Louise Fili, we dive into the turning tides of typography. Join the discussion, question the standards and give things a fresh look. Grab your copy of the Print Summer 2017 Special Typography Issue today.

The Beauty of Ballet From Above